For anyone who can still buy a ticket this is the day of the Move Beyond Tour with Derek and Julianne Hough going to New Orleans. I had hoped to get there myself  — although it was never likely. However I think it will be a good event at the Saenger for those who can. I spent my morning at a rosary and funeral for a distant cousin — Agnes Motty. Her brother James and I were pretty close friends decades ago and I was very happy to see him again after not seeing him for decades. However, I did not monopolize him on his return trip to the homeland he does not visit that much. James was a very accomplished artist when I knew him best and says that is not much a part of the life he lives now. His sister Agnes I barely knew and there were a few of his brothers I knew just a bit mostly Louis. But it was clear the long held love they had for the sister who never married was a powerful bond among them as they gathered for the funeral. 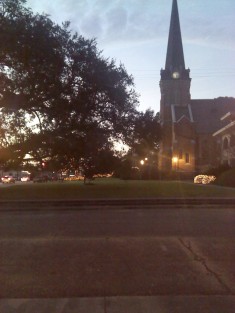 The St. Mary Magdalene Catholic Church Where I was baptized, made my First Communion and was wed.

This is being typed in part on May 18, 2017 which is my sister Sarah’s birthday. While I am a lot older than Sarah she is next in age to me among my full siblings and living siblings. Also, I have known her much longer than I knew my deceased half-brother Paul. We still spend a decent amount of time together and I called her today  she had just returned from a trip celebrating her oldest daughter Alyse graduating from Mount Saint Mary University in Maryland with many honors. Sarah and I already celebrated her birthday a bit along with an early Mothers Day and me entrusting her with a graduation gift for Alyse which she delivered in Maryland we did that over a coffee and play session we often share with her children at McDonald’s in Abbeville on Mondays. Sarah is a person who exists mostly and largely with little reference to me she has issues and concerns and autonomy that have little to do with me. But she is also one of the great long stories of my life — not to make her feel older than she is. 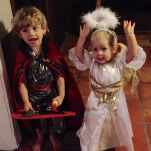 Part of this post was typed on Mothers Day, May 14, 2017 with the view to it appearing whenever it appears.  My own mother was with my Dad and others sort of separately but also with Sarah on a trip principally to visit with others in the family who are attending her granddaughter (my niece)’s graduation from Mount Saint Mary University.  It turns out that much of the family were able to gather for that event. I was happy to celbrate Mothers Day early on May 6, 2017 with most of my siblings and my mother. For all of us our relationship with our mother is a truly primal on and for me as for many it is a very long running one as well.  I was not on this trip but we have been on many together — my mother and I. The picture below is of my parents and my sister Susanna sharing a meal in the oldest building in Gettysburg, Pennsylvania which was built during the end of the colonial and the start of the revolutionary period in American history. History which has long been a pursuit of mine constantly reminds us of a long set of ties to things which themselves have been around for a long time. This is the theme of this post. 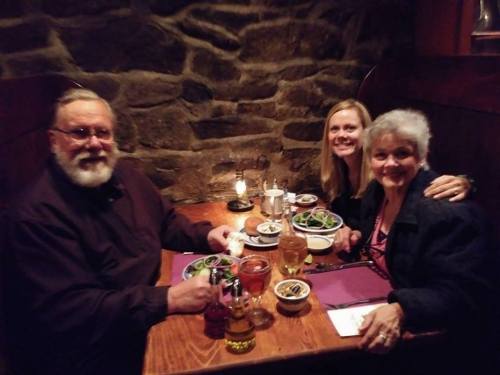 This month I have stayed abreast of space news and watched with interest and increasing distance the discussions on the future of space exploration in which I was once a more active participant.  Time has not been kind to that involvement so far but it is an interest which has been on of the long-running interests in my life so far.

The truth is the theme of continuity has been one that has been on my mind this week, the way we all attempt to carry on in various ways. I am carrying on less successfully every year by many measures but I still hold out hope for an uptick in some trend or another. I still hope for a better life trajectory than I see before me.

That brings me back to my original concept for this post today. Although Julianne Hough is young I have been her fan for a long time.  I admire the fact that she had a long career in the performing arts before I became aware of her when she was still a teenager. I suppose she is just one of a lot of possible famous and nice looking people that one could take an interest in but there is more to it than that. There is a kind of message in her life that contrasts with a lot of what I do not like in the world I live in.
Julianne Hough is very attractive, but she also works hard at being human. That is not all I could say but it is a start. I would have liked to see her tour for various reasons and maybe one day I will but it is not today. 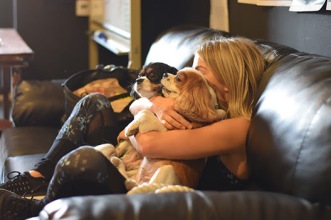 Love is a strange thing and so is family and so is friendship. In fact sex in all its permutations of attraction and disillusion is a bit odd at times as well. The handful of very famous beautiful young women who get the kind of attention Julianne Hough gets also have real lives to live and she is rooted enough to maintain a close relationship with her family. Not only doing this show with her brother but that is most notable.  Family love reminds us all that life is largely about the long run. 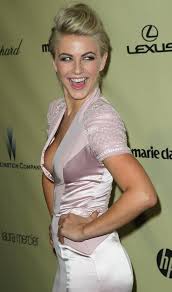 So here’s the deal…. I spent a little time with James mourning his sister, I called my  sister to wish her a happy birthday and I missed seeing Julianne perform with her brother. But I was aware today that each day one has to try to make life connect to the day and people who were there in the past and will be there in the future.  I also tried to trust in God for some things to work out in plans I make. But I know nothing has worked out in a big way in many years. Small successes are getting harder to find — but the show must go on. Not just for those of us in show business but for all us who live this life on any kind of stage. And we all do live out a kind of performance for those who observe our lives.