The Other Election Day and My Life

As the time approaches for me to post this on my blog the Electors  in the easternmost state will be and are voting for the President of the United States of America. The  results of this exercise will determine who is the next President of the United States of America. It is a very important occasion and could be worth a few posts but it just barely squeaks in with one of its own shared with other topics on my blog The voting will take place in all fifty State capitols as each arrives at noon on its own official clock. I assume President-Elect Trump will  become truly official President-Elect Trump. But it will be interesting to see if there are a few protest, rogue or faithless  electors. If anyone votes for me I will not denounce them but otherwise I cannot say that I really support deviating from the standard.

The fact that the State Capitols come into play is significant and so is the fact that voting is by state in the same way that Congress votes — but without division by houses. Each State has two electors to apportion based on it Senate delegation and as many more electors as it has Representatives assigned in the House based on its population. So there are a hundred votes divided equally among the states and more than four hundred divided by population. I think is is a good system although I have proposed radical change and have not renounced those proposals.

I have posted recently about my involvement in the World Heritage Site process which is in its infancy here in  relation to the proposed Cajun Nation or Acadiana  World Heritage Site. You can see those posts here and here. In my opinion, this process is very interesting and at the current time there are a number of us working on various aspects of the project. I feel that at this early stage it should be the intent of this committee to seek sites which represent each of the key part of the formation of a cultural landscape as well as possible. The larger committee has divided into the formation of sectional committees or subcommittees. I am currently liaison to the Martial Heritage Sites Committee. The people on our general committee are well informed and also very rooted here and connected to the community. From my earliest correspondence with the others, I found  myself suggesting that as regards points to consider for ideal locations we should consider; battlefield related references on site and on key battlefields, places of first contact, burial sites, levee and drainage sites, key village and town sites  and prominent homes all as having a specific part of a larger and comprehensive vision. Things have evolved in part due to my suggestions and these kinds  sites and others within the vision of the World Heritage Site are at least being investigated to show how, why and where the transformative project occurred which created the region we call Acadiana. the bones of our ancestors, our heritage and our patrimony deserve our respect and attention. This is starting after the year and during when Confederate monuments are being displaced and downgraded in a whole new way. I have discussed that topic here and here. But it has not been the focus of my blog in a large and major way. 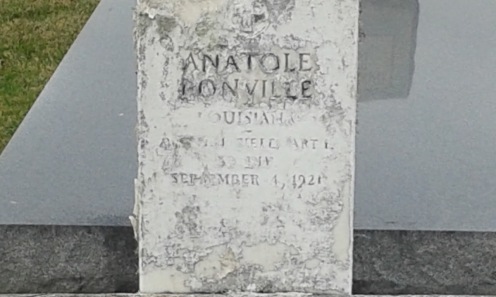 My long involvement in the struggle to preserve and enhance Acadian and Cajun heritage is one that others have interacted with long before our little exploratory committee. That is a subject that i will return to over time.

There is no shortage of contacts for those of us seeking to connect the places which together map out our heritage in Acadiana. That of course does not mean that all the sites online together will form a sufficient picture of the region for World Heritage Site purposes. But ehere are online resources worth knowing. The include state parks including the  earliest  and very Acadian example. there is a center for learned research at UL which supports this sort of activity to a remarkable degree. Nicholls State is supporting a center to recover some of maritime and nautical culture. there are places which have long preserved the heritage of prominent Acadians to some degree such as this one and this one.  There are artists who have left a legacy of viewing the landscape very well and vividly, such as Floyd Sonnier. There are those who are charged with preserving records of various kinds that are less obvious to all such as here, here and here.  There the living communities who have shared this region as indigenous nations and been part of the the journey of the Acadian people — including the Chitimacha and the Houma. There are perspectives in Spanish history that are relevant such as here and here. of course there are many  very important resources in French from a French perspective. Then, well represented on the committee that I have been working with is the Acadian Memorial and the Acadian Museum.

But all of this is in contrast to other realities of this time. Today 29 years ago was the only day that I was ever married. I still remember it vividly — of course. But my ex-wife and have been aprt more than twice as long as we were together. 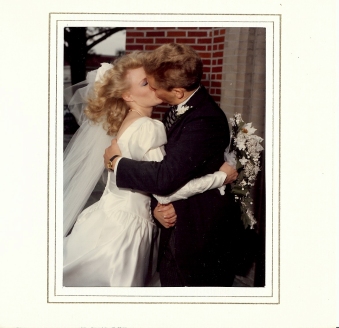 Michelle and I kiss on our wedding day.

Michelle and I say our vows.

Michelle and I on our wedding day. 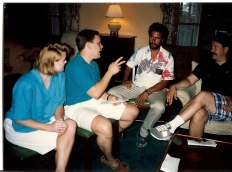 Michelle and I conversing with two of my paternal uncles

However, my own energy and time are not mostly devoted to the ever more distant past. It is Christmastime and I am tired, busy and a little festive as well as a little depressed. the holidays are challenging for me and many of those around me for a variety of reasons. But they are still the holidays. I have had my moments of joy and hope to post more about Christmas.  But I have also had moments of sorrow and will post more of those as well. It is in this context that for me the new POTUS is being elected. 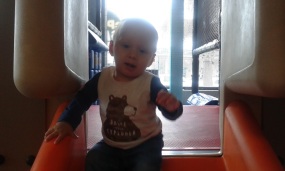 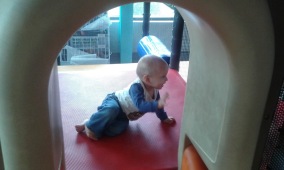