This is one of those posts that can be read as an essay but where the links embedded in the text are one of the main purposes of the post– I bring together many responses to the Trump Triumph. So what will Trump do? What has he promised to do?  Do Presidents keep many of their promises? There are studies that indicate they do not keep nearly all of them in the United States but they do keep a good number.  The Left, Liberals and in some cases Libertarians are concerned about Trump’s perceived promises they remember that he seemed at least to promise to build a wall on the southern border, to put a temporary ban on Muslims immigrating to the United States of America,  to repeal and replace Obamacare (the Affordable Care Act), to expel all illegal aliens and to withdraw from NATO.  He has greatly modified his position on the ban on Muslims, he has shown a more nuanced view about Obamacare and has set his priority on the expulsion of aliens with a criminal record. I wish that he had a real plan to help Christians persecuted in the middle east which he did have when he first started and which I mentioned. he has let that go in the give and take so far– maybe it will come back into play. But have not heard that it is on the table.  He was in part moved to this whole process by the torture and slaughter of Christians in those countries. But has that — which I liked best about him — survived?

These masses of those opposed to him see his appointment of Stephen Bannon as an appointment for both the far right and for racism. As any regular readers of this blog must know, I am a former Democrat who never has joined any other party. I voted for Chris Keniston of the Veterans Party for President of the United States in this cycle and  almost entirely for Republicans otherwise. But I voted for Governor John Bell Edwards in the last major election and usually vote for a mix of Republicans and Democrats. I do not hold  my political behavior up as exemplary but it  is important background for this story.

Michael Moore the documentarian of the current American left  who made films like Capitalism: A Love Story , Where to Invade Next and Roger and Me is no friend to the President-Elect Donald J. Trump. But he tried to tell his liberal audience that Trump would win.  Now he is predicting that Trump will follow in the path trod by former President Richard  Nixon and former Alaska Governor Sarah Palin and not finish his term in office. The  American Left and the Liberal establishment in this country have a hard time believing that the man famously endorsed by the KKK has won the election.  They decry racial violence and racism but do not much denounce the violence to which Trump supporters were repeatedly subjected. There are those looking at Chelsea Clinton to take up where here parents have left off as other decry the death of two political dynasties– Bush and Clinton families. Powerful people see this as a time for a noble resistance. But the Democrats are nonetheless in tatters and ruin — at least for now. 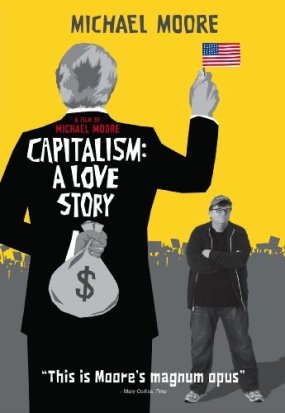 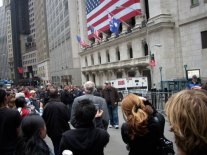 A crowd gathers as Michael Moore searches for answers at the New York Stock Exchange. Moore’s new film, Capitalism: A Love Story, will be in theaters nationally on October 2nd. Released by Overture Films. 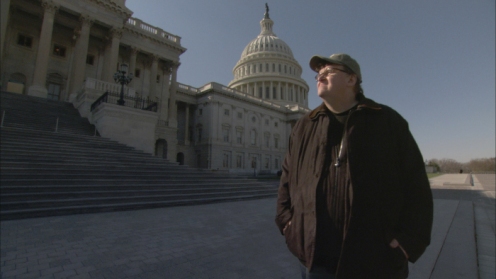 Michael Moore pays a visit to the U.S. Capitol. Moore’s new film, Capitalism: A Love Story, will be in theaters nationally on October 2nd. Released by Overture Films.
I had intended to be at LSU Graduate School if possible this semester. There is a list of books to help Americans mostly left of center to understand how this election can be reasoned out in terms of political theory, demographics, electoral realities and recent history. Here is a list which includes a book by Dr. Nancy Isenberg of LSU. Her book is White Trash and though I have not yet read it I have seen a good bit about it. There is no doubt that this election is about the unrest and discontent of the working poor whites of these United States. The vision of America as sliding into an ethnically and racially confused malaise in postindustrial regions north of the Mason-Dixon Line is nothing new. It is as old as Hill Street Blues the acclaimed television police drama. Although not everyone agrees about what that all meant.  What do the specific issues of whiteness and other racial identities have to do with Trump?  That is not clear to me but there certainly are relevant racial issues and defining factors. There is racial violence attributed to him which may or may not have anything to do with his supporters. Nor is it known that all the vast violence against his cause has no racist elements. Whether Keith Ellison or Elizabeth Warren becomes the leader of the Democratic National Committee the new leadership seems likely to paint Trump as a bigot.

I am breaking the flow and structure of this essay show the progression of a post by a man of Acadian descent ( but not reared entirely  in the community although connected to it very much)who is a Ph.D. candidate at Louisiana State University’s  History Department and who is also my Facebook friend.  Here is a selection his progression of comments just before and after Election Day. they are reproduced in full with one parenthetical name added and only for clarity.

September 27, 2016: “In truth, the Hillary haters seem to resent her more than disagree with her. They demand to be humored and catered to. They hold her to wildly different standards than her male counterparts. They regard her with an unprecedented degree of suspicion. Above all, they really, really want to see her punished. And an aggressive male presence—even if dangerously incompetent—seems to comfort a great many of them.

Everyone but them knows damn well why.

Bad news for the haters: History is decidedly unafraid of “the woman card.” It doesn’t care how many people will stand on tables today and swear they’d feel the same if she were a man. It will see us for what we are—a sick society, driven by misogyny and pathetically struggling to come to terms with the fact that women do not exist solely to nurture.”

October 12,, 2016:I personally do not care who this piece of shit (Glen Beck) endorses. The real motive here is he wants clicks as he tries to overcome irrelevance. But hell, I enjoy the thought of republicans’ heads exploding as their party implodes, hence the share.

October 27, 2016: I agree with this one hundred percent. Facebook should call them “connections” instead of “friends.” Some of you, no matter how we met, are not my “friend.” You’re here because I’m hoping you start a political/historical argument with me so I can kick your ass. That’s my Facebook philosophy. Deal with it.

That being said, these are my feelings exactly.

November 5, 2016: If the Trump wackos start rioting after Hillary wins Tuesday night and you need a place to go, hide in the nearest library or bookstore, they’ll never think to go near either of those places

November 8, 2016: Congratulations Trumpsters. You won, we lost. Lessons? When the media normalizes racism, sexism, misogyny, and xenophobia, there are consequences. Elections have consequences. 240 years of the United States as a constitutional republic have come down to this. God help us.

I probably won’t be posting any more on Facebook for a good while, if ever.

November 13, 2016: Thirty percent of the vote in California is still not counted, along with many precincts in New York–Democratic strongholds. Hillary Clinton will likely win the popular vote by 2.2 million votes. Let that sink in. That’s over 20 packed-out Tiger Stadiums.

Her margin of victory will be more than victorious candidates John F. Kennedy (over Nixon in 1960) and Richard Nixon (over Hubert Humphrey in 1968.) And in terms of popular vote quantity, she is, at this point in history,the second-most popular presidential candidate in history.

Don’t misunderstand. I still reservedly endorse the Electoral College. In a constitutional republic, “pure democracy” ends at the state level. I do believe in safeguards against the “tyranny of the majority,” though this election forces me to rethink.

My point? The Trump forces condemning the protesters–and who had called for “armed rebellion” if Trump lost–what would they be doing right now if Donald Trump had won the popular vote by over 2 million and lost in the electoral college?

November 14, 2016: Let’s forget all the economic and political fantasies of Trump’s campaign rhetoric to “get tough” with China. He’s going to label them a “currency manipulator”? Fine. The resolution, after being yawned at, will languish for years in the World Trade Organization’s files before it is even looked at.

The point? Li Keqiang is the Premier of China and head of the Communist Party. You don’t climb to the top of that communist jungle without literally and figuratively, stepping over the bodies of your enemies. From Mao Zedong and the Long March, Chinese leaders have been vetted by their very system that is the epitome of the law of the jungle. If they make it all the way to the top to rule over one billion people, they are made of iron.

So a fat trust-fund baby, who has never held political office or served in the military; who, if he would have put daddy’s inheritance into mutual funds would have had a bigger fortune than he does with his investments and “business savvy” is going to “get tough” with China?

So who will Trump turn out to be? I had a discussion with former Governor Kathleen Babineaux Blanco at the Donor’s Dinner for Family Missions Company Last year and I told her that as Louisiana had voted her in and voted in her opposing Party President so it would likely be in the case of John Bell Edwards and Donald Trump. In the case of former Governor Bobby Jindal we had the same thing although Louisiana did not provide its electoral votes to Obama.   We have chosen for the third time in a row at least a very contrarian governor. As the Dems sink elsewhere we have a strong Democrat as governor. But he will struggle in these years. I think that it is a necessary struggle but I also think that Trump is part of a necessary change. I will begin to discuss the policy of the next presidency and its implications soon enough. But let us get the feel of where we all stand now…