Last night I watched LeBron James lead the determined Cavaliers against the super professional Steph Curry and the Golden State Warriors. The beloved King James who had seen his jersey burnt in Cleveland when he signed to play in Miami was not quite in the land of ordinary men. He was  crossing over a bit into legend on that moment.  It was Fathers Day and a lot of American Fathers (and other fathers too) are sports fans. It seems likely that for many families in Cleveland this was Fathers Day they are not likely to forget.  Of course for the Curry family and the fans of the Golden State Warriors it was a bitter disappointment. The moment one team and one man and one city flirted with legend was the moment that another story fell short the best regular season in NBA history ended with a hard fought  seven game finals but it did not end with the championship.

A moment of triumph for Cleveland

Competition is not the only value worth having and really is not the central value of my own life. But it is part of life for all of us and it is part of male identity. This Sunday Americans celebrated Fathers Day. I had an enjoyable time with my father.  I brought him gifts and we enjoyed drinks at the Riverfront restaurant in Abbeville and a beautiful meal that my mother had prepared. During this occasion most of the attention goes to the stories of fathers bringing up children in pretty good situations.  But fathering is done in many parts of the world that are far from ideal. The sense of struggle is almost endless for many people and many of them are fathers too. The Syrian refugees, the destitute in camps, homeless shelters,  and squatting in sites around the world — many of these are fathers as well.  This is one very compelling study about what is happening in the world.  It does not focus on the whole world but on one part of it very specifically, the world of a large group or class of Syrian refugees.  My Dad has spent a lot of time with those who were in trouble. We have lived and he has lived and visited regions where people were involved in the kinds of lingering and sporadic civil wars that were common in the twentieth century, places where mass migrations had strained local resources,  places recently devastated by hurricanes and places under various kinds of social change.

Being with him in some of those times  and places where the trouble and need which attracted us there were prevalent was not always easy. The path of a life in the missions was certainly not one without real challenges. The story of those challenges and the joys that go with them has been a story that has long been a part of my life itself — not just the events of the story but the telling and retelling of that story. Even the journalism I have made a little bit of a living doing from time to time and the fiction that has not yet paid any bills –even that is informed by the really extremely varied story of that life and those years especially spent together often dealing with crises.

The novel I wrote online before many but never yet published receives paper form.

Crises shape the community, hardship shapes a community and depression shapes a community.  So does the fear of violence. Americans are subject to a considerable amount of fear of violence and there is not that much agreement about how to deal with it. The cultural hostility to a person achieving any kind of self reliance whatever can be very much manifest in groups of people that inhabit many people and intimidate the family oriented, hardworking and insightful people trying to prevent those neighborhoods from turning to living hells or remaining such. A country like ours that is so dotted with riots and violence and punctuates it life with so many bombings and mass shootings is not necessarily a place that will not be crippled by more emphasis on disarming the citizenry . The Obama administration has often been criticized  here and so have  those around him who want an unarmed lawful citizenry. They are criticized in large part because I believe that they do not know how profound the savagery, disorder and decay is in its effects in destroying the quality of life in this country.  Limiting the arms of besieged American beset with violence, chaos and resistance to public advancement on many sides will certainly increase this sense of a society where it is not safe to try to survive and thrive. Here is a story about these matter in terms of what American guns mean to maintaining a balance of terror. The bad guys will not be disarming much any time soon.

My Dad is a gun owner. He is not a big preacher of the value of an armed citizenry and in many rough places where we lived we could not keep weapons at home. In addition the radical nature of our involvement with those in need  required us to risk a level of vulnerability  — but my dad is, as I have always been, a man who knew and used guns and respected and enjoyed them.

My mother in front a Confederate monument in New Orleans reminds us of what complexity there is in violence and duty.

My father is a lifelong outdoorsman and that is a passion we have shared though for me like most good things it has just been in decline.

But the arts of shooting and killing like many other things have not been the only part of his life that we have shared. Family, ministry and other values and themes of life have really been much more important without undervaluing those things.  There have also been times visiting tourist sites, wealthy friends and relatives, living in neighborhoods near stable work and hanging out on the beach. 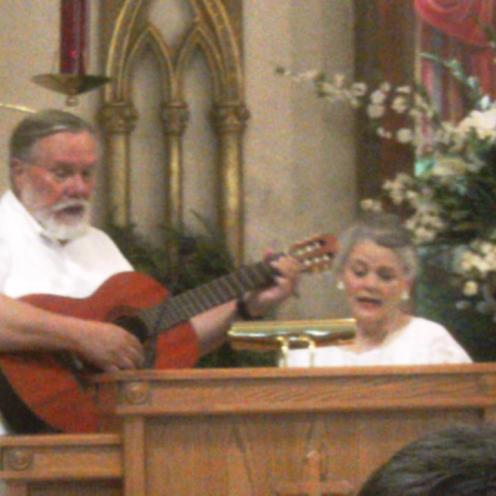 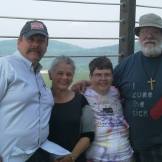 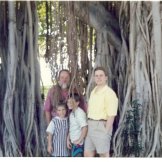 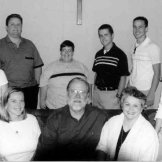 But I think back on my life as life in which the moments victory in dark places and hard times mattered a lot. Compared to opening a new harbor facility, a new factory or a new large piece of permanent public infrastructure a lot of the victories our family shared were kind of fleeting and heard to define. Life the elated Cleveland fans who must go back to the problems that their city faces tomorrow. But Cleveland is building back in many ways over the last twenty years. Form the Rock and Roll Hall of Fame, to the improving Browns, to American Splendor and  the story of King James and his knights of the round ball — Cleveland is a gritty place in a gritty state looking for and finding some real meaning and hope.

Saints Quarterback Celebrates with his Son After Winning The Super Bowl

Whatever come in the coming year that is difficult and challenging I am sure tha watching the game last nigh after getting back from Dad’s will not be my favorite memory. I am not a huge NBA fan really. But I am also sure that it is a Father’s day even that has some meaning. It is a moment in time that many will treasure  as dads and with their dads.