Interrupting the Series for a note on Presidential politics

This is a historic day and I am interrupting my pattern of posting lately to comment on the news of the Presidential race which I have not been doing much. Hillary Clinton may well be the Democratic Presidential nominee. Bernie Sanders still seems to disagree and he may be right but the occasion deserves to interrupt my series of posts — much as I hate to do so. Especially as the last post is the most popular I have had in a while. Even more so because Dudley Leblanc is a politician I have a great desire to write about.

Well according to most People-in-the-know, Hillary Clinton is the first presumptive nominee of a major political party in the United States who is also a woman. That is a milestone. If we had a female head of state we all know that means something new as opposed to the old days when mane ran everything. We will join the Buzz Lightyear company of Catherine the Great’s Russia, Elizabeth I’s England, Cleopatra’s Egypt, Deborah’s loose Hebrew Confederacy, Theodosia’s Empire and other avant guard and sci-fi periods of human endeavor so new and newfangled we can hardly imagine them. Empress Qi-xi’s (Pinyin varies four ways including Cici) China. I think it could be seriously said that America is truly overdue for a woman head of state and government. I have no mastered the Census bureau data but my observation leads me to believe that there are quite a few women in this country. 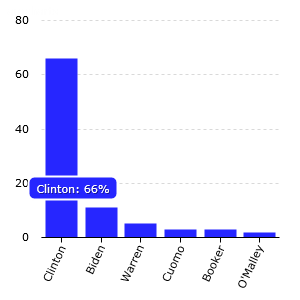 Early December 2014?
Whenever this is it is Clinton’s race to lose at that moment.

However, if she is elected and perhaps before I will be critiquing American feminism which she represents as I never have before — so long as I have health and access to a computer. To some degree I have given things a pass in my small opposition voice which I will no longer give a pass to if Hillary is head of State and government. I voted for McCain-Palin and have voted for several women for many offices who came from both major parties. At one time I kept track of my voting record and found that I voted more often for women when there was a man and a woman in the same race than I did for the man or men in the race. Hillary Clinton is not anyone I have ever trusted, felt great empathy with or been very supportive of in any way I can remember. But I can at least recognize this moment of achievement even if there are some other points of view about whether she has secured the nomination –there really are such arguments to be made (it is not a fantasy and in fact this year comes closer to what I consider a real election than any other I can remember taken all in all).

The voting booth remains a powerful part of our society.

Clinton looks more presidential than she ever did before. I believe that is something real and it matters. To some apparently horrible people like me she has always seemed bitter, pinched and truculent. Worst and most sexist of all we did not like that about her. An unforgivably, while we were disliking that tone she was a woman. Now she seems more open and gracious.

The link below reminds anyone reading of what I was thinking about in political terms on this date a few years ago… Its name bears showing too.

This entry was posted in 1 and tagged Democrats, Hillary Clinton, The US Presidency, women. Bookmark the permalink.