What will this next Presidential election tell us about the future of America?  Will it tell us more clearly where we are headed as a country? It is not such a simple thing to discover a national direction at all — all of us know that any great country and certainly ours is composed of lots of different people with differing interests, backgrounds and minor allegiances and associations within the great national whole. Donald Trump seems to be getting a lot of his energy and momentum from reacting to those whom he clearly believes must first be removed from whatever share of America they occupy unlawfully

It is certainly worth noting that Donald Trump has moved into the commanding lead for first place by taking a strong stance against illegal immigration. The question of whether or not the children of undocumented workers should be treated as unlawful aliens is yet another question. Trump is committing himself  to acting within the law more or less but pushing for a legal methodology to effect the export of native born US Citizens. Nobody disputes Ted Cruz is a citizen as inherited from his parents and affirmed by his life but his one liability as a non-native is that he cannot be President but he is spearheading the larger movement to destroy Native Provisions and Rights as a whole. Those who read this blog will know that I believe false ideas and ridiculous interpretations of equality have driven the country into chaos and dysfunction but this all out press against aliens in this way without adjusting any other issues in our society is really about the wrong kind of discrimination and the wrong kind of identity politics.  I have written about discrimination in many places in this blog and you can see some of the posts here, here and here. We must recognize the rights of those here legally and we must recognize the faults in our legal system. But the solutions we need are not likely to involve such a drastic misinterpretation of the role which labor and consumption by people from neighboring and other alien societies may have on our development and our current state of being .

Gay Marriage has usurped the meaning of the rainbow symbol but it is a symbol of harmony, hope and coexistence with many different bases for its meaning, We all have to recognize that not all aspects of our lives and heritages must be blended to make a strong America. My own views about what needs to be done are rather radical and have been spelled out in model constitutions in this blog. You can begin to access them here and here. However, let us consider carefully that we have plenty of room for anger against ISIL , plenty of need for radical action in saving our infrastructure. We do need to assert our control over our demographic future — I make no bones about this. But is dispossessing and moving people as criminal by the millions the answer?  I propose mass movements within the country with compensations, some deportations and lots of constitutional reform. The issue will be visited in this blog again. But Mexico and the Mexicans here contribute a great deal and this proposal is couched in very hostile terms. 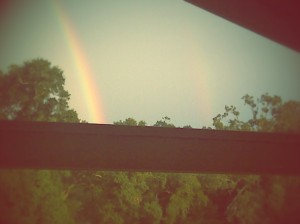 Double rainbow at Big Woods in August of 2015

I was born in 1964.  I made tie-dyed tee-shirts at school, people I knew were hippies and others served in the military operations in and around Vietnam.  It was a different era. One of the things that I remember is that not only was the music which was being written and performed by first artists different but different music got covered, got sung around campfires and at schools and was part of my childhood’s sound track.  One song I remember was the anthem by Woody Guthrie. It was a song in English addressed to Americans but it had a meaning that led to a kind of harmony we are losing touch with today. 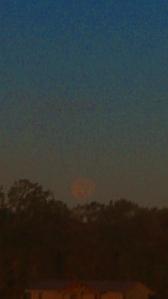 Policies come and go but we all see the heavens and can dream and see visions.

Three highways, the waters, the great commons of our country are indeed places all Americans should feel responsible for in life.  The desire for clean air and clean water will mean restricting what people do with their access to air and water and their use of land. Guthrie was committed to the great commons.

Today there is a lot of concentration by Presidential hopefuls on the States of Iowa and New Hampshire. However over the totality of a race the  candidates do tend to reach out to a lot of the Union. These United States are not equally addressed and  courted but all of them and some of the lands outside the states are at least addressed and courted. We all watch these candidates chart their paths and plan their trips across the face of our great nation.  Restricted access to the many reactions to Donald Trump on immigration can be accessed here.

When the sun came shining, and I was strolling
And the wheat fields waving & the dust clouds rolling
As the fog was lifting a voice was chanting
This land was made for you and me

In those diamond sand deserts in Arizona people who feel that the government of the United States has long ignored there concerns are flocking to Trump rallies by the thousands. I have a mixed history personally with illegal migrants. I have helped people in need and given casual work to people likely here without full paperwork. I have physically but not criminally driven men off the places they were camped and parked who were not meeting the standard of the place. I have of course lived in Mexico and had lots of conversations with the families who send people to work here. I am aware of the increase in Central Americans passing through Mexico. My opinions and proposals are not modest but they are based on reality. They also recognize a rich, wide and diverse country to be preserved.  Can liberal and libertarian people accept the need for border security in Arizona? Can conservatives consider the economic and cultural realities of the country we actually live in? Travelling around the country gives all our candidates a chance to see different realities. Those realities are what matter more than our wishes about the way things ought to be.

Guthrie like the varied pioneers, the Acadian Diaspora, Johnny Appleseed, the armies marching in the War Between the States,  Lewis and Clark’s expedition,  The young George Washington, Alex De Toqueville and so many others is roaming across this great land learning and changing.  Like the others listed and many more he hopes to come and believes that he is coming to a clearer sense of what the United States of America is all about. Hillary Clinton has had several road trips and  has found in them a kind of legitimacy fro her causes and aspirations.   In America we find the adventure of human solidarity awaiting us and we must face that challenge in determining how we will face the future.  Guthrie had this to say about the quest for that dreamed of solidarity in sufficiency in his lyrics:

In the shadow of the steeple I saw my people
By the relief office I seen my people
As they stood there hungry, I stood there asking
Is this land made for you and me?

Recognizing what he must address that is not well in this great land gives both Guthrie himself and his fictional persona in the lyrics of his song a quest, a destiny and a sense of daily purpose.  The candidates on the road are also in search of such a quest which in turn they can persuade a lot of other people to support them in pursuing. In their resolve they will find their message. Guthrie desscribes such a resolve and such a message.

The best thing about along race by a large field of candidates is that there is plenty to write and say before the election runs its course. The truth s that American politics has gotten pretty interesting lately and has never been boring. But that does not mean we all are interested in the same things and in fact many people do not have an interest which inspires them to vote at all.

What do Americans expect? If there is an American dream still around what is it? How do all the parts of  our economy come together to shape a vision for the future and the workings of that future? Asians who flock to our technical and science programs and go home to teach and lead,  the decline of marriage and formal nuclear families, the war on neighborhoods, the lack of some cultural systems needed for survival AND problems with illegal immigration from the Southern Border ARE ALL factors in our demographic crisis. The kinds of jobs people will take and do and how many parts of our infrastructure are undermined by new systems that may be ill advised — that also has a demographic element. I advise against panic but the crisis is everywhere.

Changes in American society are made manifest in all sorts of ways. Amazon has recently been blasted by the New York Times for its work culture in an important piece of journalism that may be read here in a form similar to the newsstand and subscription article I think and you can see how other media outlets have covered the exchange here and here.

A lot of Americans are reacting to a fear of Mexican ethnic demographic expansion when they support Trump’s proposals. I love Mexico but I want the USA to be the USA and not the EEUUMM (as Mexico is properly abbreviated). But hating Mexican-American ethnicity even where it is troubled is not in any part of my vision for the country.   My father, my nephew Soren and I recently gathered together to watch McFarland USA which starred Kevin Costner and Maria Bello along with a larger cast of lesser known Latino and Hispanic actors… I recommend watching it and think most people will come away thinking what they already thought on the big issues. But at least it is a glimpse of one part of the huge puzzle too many politicians are pretending does not exist. Our Demographic puzzle is discussed in detail in my model constitutions and I take it seriously. But to single out one problem in an extreme way can be  ill advised.

One response to “Presidential Politics and American Demographics”