Presidential Politics and the State of the World.

What does the developing election cycle mean and portend for America?This post has links to other pages and posts in this blog. It is a chance to get caught up with what I think if that is something you wish to do. It skims across the current field of candidates and looks briefly what the election might mean. It is not an in depth essay on any subject. I am not running away from what I have written in the past  and I am laying out here connections I will return to if and when I write more about this  series of elections which will elect the next President of the United States.

When I started this blog I had a regular correspondence with people around the world more than I do today. My own sense of needing to address issues that I address here was born in part out of the desire to engage with contacts in the Philippines, China, Mexico, Brazil, the United Kingdom, France, Germany, Greece and other countries. America still engages the world daily and must do so  effectively. I do not know what my future will bring but I know that I am not in a position to run for President of the United States — so who is running?  When we vote will we vote to make a difference, to preserve something in danger or what? Americans have choices to make at the end of Obama’s second term.

The voting booth remains a powerful part of our society.

I have both followed the news and politics as they are in this blog and also proposed radical change. I am never personally doing all that very well and I worry a good bit at a personal level but in this blog I have proposed constitutional changes addressing weaknesses in our system, universal human challenges, unmet needs that cripple needed contributors to our future and foreign threats. This post is not about running away from that work.  But I do acknowledge that other visions are more likely to engage the world on behalf of America for the foreseeable future. We should ask whether the people running are really engaging the challenges America must engage to survive and thrive. Are we facing the real future and present?

Who will be the next President of the United States?  Will it be Hillary Clinton, the supposedly unassailable Democrat who is not new to anything including this blog — as you can see here? Will it be the Socialist and Independent surprise leader of crowds across America — Bernie Sanders? Will Vice Presidential elder statesmen like Albert Gore and Joseph Biden join the two older contenders in the pimary arena? Will one of them become President? Will it be one of the Democrats scarcely getting a mention today?

Is there an even more disruptive surprise coming from the Left? Will someone lead and attack on that side of the political spectrum which cannot yet be articulated?

Or does it seem more likely that the nest President of the United States will be more or less a Republican? Will it be the billionaire celebrity Donald Trump whom I recently profiled in this blog at this post? Will it be Jeb Bush the scion of the Bush Presidential Dynasty, former governor of Texas and a man with deep ties to the emerging Hispanic vote?  Will it be Ted Cruz, who is a rock ribbed conservative capable of exciting the troops of America’s unusual right who  nonetheless is running in defiance of the Constitution as read by most conservatives because he was not born on US soil? Will it be the Southern Huckabee, the female Fiorina, the African-American Carson, the Latino Rubio or New Jersey poster boy Christie — all of whom have a specific base and a specific bridge to other votes of the type a demographer would find in their base?

So many others seem to have a chance to cause some trouble for those leaders and Kasich, Santorum, Perry, Jindal and the rest all have real issues and real supporters. Will one of them take it away?

It so happens that this blog is about as old as the Obama administration and began in the campaign running up to it.  I have been writing for a long time. I have been discussing politics for a long time. I have been discussing the politics related to the Presidency of the United States for a long time. The blog may not have been around longer than Obama’s White House but the interest and discussions have been.  It is true that his presidency has been one of the factors that has caused me to make hard choices . It has been a factor which along with other factors has caused me to be clearer in some areas, more open on other issues, more radical in yet other areas.

If it had been more successful then one might argue that it would be facing a real test of political relevance as the eight years of the Obama administration come to a close.  So this is a blog post about where I stand and where I believe that the world stands as voters try to sort out who will be the next President of the United States of America. I think that it really does matter  what situation the next President of the United States will be elected into and required to engage.

To safeguard liberty we must be able to adapt to the changing times.

The future of the united States as a whole is not susceptible to being predicted in the way and with the kind of certainty many people think that they would like to see. I have certainly experienced change in my personal life since  Obama was elected. Out of the four grandparents that I was born with three were living when Obama was elected and none are still with me today. My undergraduate alma mater had never won a bowl game in football and now they have set records in dominating the New Orleans Bowl. Since Obama was elected, family has evolved my parents celebrated their 50th wedding anniversary and currently are not residing together. Since Obama was elected the bad aspects of much of my life as a continuity and a collection of trends have become far more impossible to deal with than they were before. In that process of refining my ideas and communicating them I wrote a pair of model constitutions — one for the United States and one for Louisiana. 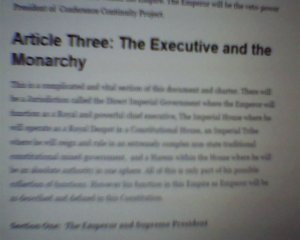 This blog itself represents a good bit of my work in recent years.

But the world has gone rolling forward. ISIS has become a big player on the world stage, we have normalized  relations with Cuba, we have a nuclear deal with Iran and the Russians have invaded and annexed the Crimea. Racial violence, police misconduct, the Occupy Movement, Acorn and many other signs of stress and disorder have been featured in the headlines and the evening news. The Confederate flags  and monuments have disappeared from many places. The Great BP Oil Leak and the constant news of storms, droughts, floods and fires have made Americans worry about the basic security of the land and sea themselves.  Obamacare has become law, Gay marriage is declared equal every where by the Supreme Court and mass shootings have become almost too numerous to enumerate.

Bobby Jindal is the first Governor of Louisiana to seek the Presidency of the United States in my lifetime. I could not say that I am opposing him or supporting him at this juncture. However, the fact that I am not completely supporting him and doing so enthusiastically is an indication that he and I do not share all of the vision of where we need to go next or who needs to take America there. My own sense of political engagement has not much increased over the last eight years but it has not much diminished either. 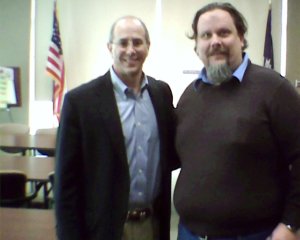 Dr. Boustany and I at a town hall meeting. This was several years ago.

The struggles of the country have a complicated timeline and do not match in any particular way my writings about Obama as a phenomenon described here or my writings about the constitutional changes I suggested in pages such as this one or posts such as this one.. However, there have been blog posts dealing with topical news and you can look at examples of that here and here. Whatever else may have happened there has been a continuous evolution in the lives and circumstances of all Americans and the country has changed. But perhaps it has not changed as much as I warned it might.

America is still a Federal union with many levels of government and especially with the States still possessed of some sovereign status.  In my own concern about politics there have been various state issues as well as the issues of the Union which have concerned me. That is evidently going to be part of the future that the next President must face — federalism.

The question then becomes what is this country really facing in the next election?  The truth is that I do not think that any of us fully know the answer. It may be that the next president ends any interest in radical change, brings in change more radical than anyone else or simply takes presidential politics farther away from engaging with the great tensions and debates raging across America.