Strength, Security and the Future

Is the crisis in Ukraine and Crimea largely a show of strength? Who is showing strength to whom? Does Syria matter intensely and greatly in all this are is that just another small piece of a world wide puzzle which is likely never to be completely assembled? Our security in the United States and the security of many others around the world depends on many questions besides these. There are so many reasons to be concerned that I will not discuss in this blog. I just spent much of the week dealing with a death of the grandfather of two of my nieces and a nephew. Another former colleague and friend in a limited sense is in the hospital having lost most of her physical functions in a sudden injury. I never lack for reminders of how fragile human strength is in the individual.  It is far from everlasting in nations and states.

This is the author of this blog. I am standing beside the stone boat in the Summer Palace in Beijing.

I am more aware than usual of the limits of my own strength. My father is lying abed with a painful foot and ankle  now and my only living grandfather (or grandparent for that matter) is bedridden and has been for years.  But this post is not about my own struggles with my health or those of my ancestors. This post is more about the strength of the United States of America in 2014. Strength is a fairly broad term to use to describe a set of qualities in a man, community, corporation, athlete or country. The quality of strength desired and measured differs from on type of strong being which is measured to another. 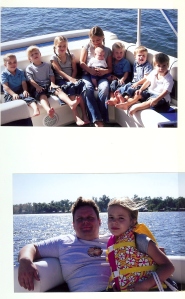 My immediate family vacationing on False River before my cousin Severin W. Summers III was killed in Afghanistan. That was the site of the last long conversation we had about war, honor and family and peace.

What can be done to help the Ukrainians who seek to move forward the process of transforming their society into an ever more positive and prosperous regime without creating impossible conditions for Russia? Can America admit that there is questionable legitimacy in the rump parliament and revolution government? Can the US admit Russia cannot place Crimea in such uncertain hands and most Crimeans may well want a Russian Crimea?

Yes secession of Crimea for a real independent Ukraine perhaps more federal than this one could be the answer. They will have to work with Russia on the issue of natural gas pipelines to Europe.  But America needs to protect its borders and solvency as well as to maintain its military heritage. I am not sure how much we can do in Ukraine. We must do something but  be honest with Ukraine that the more they want ties with us the less that can be done for Crimea. Truthfully this applies to the EU and it is the EU more than the USA that Ukraine is now courting.

I have in this blog many proposals to change America. But war with Russia over the Crimean Peninsula is not in any plan I have. I believe there is a role for America. But it is a dangerous game and nobody will come out looking like a superhero. The more Western we make Ukraine the more Russian Crimea must be because at some point we have to stop pretending international law is something we always observe and obey. Because some fairness is necessary.

The seal of the Confederacy ties the Lost Cause to the Revolution and the past long before that war.

This is not an easy time but it is a good time to promise oneself and commit oneself to the cause of a strong secure America with a future. To some degree we all face the facts of living in an age where strength in nuclear warheads deters less than some thought it would. Yet we also face the fact that our country must survive each challenge along the way — even as we seek to reach heights of excellence.

Strength requires wisdom to manage. I myself have both strength and weaknesses and each have caused me their own sets of problems. America has many problems past this one. But this is a serious issue. We are trying to really impose our views on the borders of Russia in a very open and confrontational style. I hope that all of this is being handled well.

2 responses to “Strength, Security and the Future”