This is going to be one of my shortest posts on the spill. I think that we can see that (while BP claims it will not be an issue in this case) the insurance aspect of of US Oil Pollution Act law and regulation is grossly inadequate. The federal government are involved but they have not declared the Gulf Coast a disater area which would free up the machinery of governance and money and then allow for the billing of BP while addressing parts of the crisis in a more timely manner. As of this oil kill of wildlife was found in texas and so now every Gulf Coast state has been affected.

I actually find the assurances that this will never happen again upsetting. Such a claim will excuse the industry from improving mitigation, containment and deployment technology. It will excuse government from creating better insurance and response and licensing regimes. It almost makes certain that their will be another catastrophe instead of only a potential catastrophe. Unless Hayward and others mean the result won’t happen again and will cooperate in making needed changes in governance and industry. However, such an attitude has never existed. This “never again  attitude” is like a kind of meth which people are allowed distribute every where and only receive love and respect in return. It is time for grown-ups to somehow assert themselves.

I encourage you to contact the Louisiana Congressional Delegation. Contact information is available at the following link:

You can also contact your own legislators if you are from elsewhere. That may help a great deal. You cna also contact the White House at the link below.

I am just going to mention these things and encourage my readers to work awareness of this spill into their political consciousness.  We must deal with this as a political event as well.  I personally have so much horror in my memory and have had enough nightmares in my life that it is hard for me to muster much emotion for any given crisis. However, if you can honestly express outrage this may be a good time and place to do so. Let people know that the oil spill is a priority for you if it is.

I also want to mention that there were no oil sightings for coastal Louisiana published this weekend by GOHSEP. Therefore I have published their map of locations,sightings and models for these days at the bottom of this page.

Protests are going on in many places 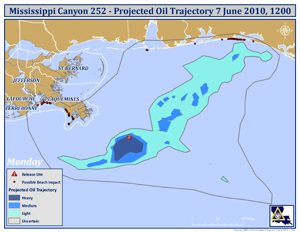